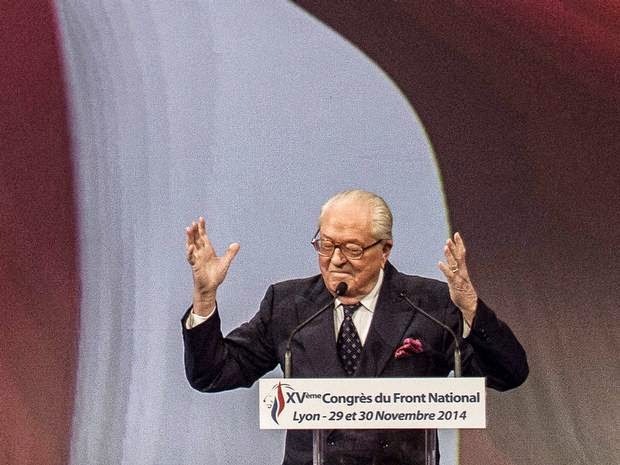 The Charlie Hebdo massacre may have been the work of an “intelligence agency”, working with the connivance of French authorities, according to Jean-Marie Le Pen, founder of the far right Front National.

In an interview with a virulently anti-Western Russian newspaper, Mr Le Pen, 86, gave credence to conspiracy theories circulating on the internet suggesting that the attack was the work of American or Israeli agents seeking to foment a civil war between Islam and the West.

His comments – only partially retracted in an interview with the French newspaper Le Monde today – provoked outrage amongst French politicians. They will also infuriate Marine Le Pen, his daughter, and successor as leader of the FN, who has been trying to distance the party from her father’s extreme and provocative remarks.
Mr Le Pen stood down as FN leader three years ago but remains President-for-life. He made the comments in an interview with Komsomolskaïa Pravda, a newspaper which had already blamed the United States for the terrorist mayhem in France.

“The shooting at Charlie Hebdo resembles a secret service operation but we have no proof of that,” the newspaper quoted Mr Le Pen as saying. “I don’t think it was organised by the French authorities but they permitted this crime to be committed.  That, for the moment, is just a supposition.”

To justify his comments, Mr Le Pen pointed to the fact that one of the Kouachi brothers, who carried out the Charlie Hebdo massacre, left his identity card in a crashed getaway car. He compared this to the “miraculous fact” – beloved by conspiracy theorists – that one of the passports of the 9/11 hijackers was found on the ground in New York after two planes collided with the twin towers of the World Trade Centre in 2001.

Mr Le Pen made two other provocative remarks in the interview. He said that the 1,500,000 who marched “against hatred” in Paris last Sunday were not “Charlies” but “Charlie Chaplins” (ie clowns). He also said that there were 15,000,00 to 20,000,000 Muslims in France – three or four times the generally accepted figures of 5,000,000 people who are practising Muslims or have Muslim backgrounds.

In an interview with Le Monde today, Mr Le Pen repeated his suspicions about the identity card but said he “could not recall” talking about “secret services” to the Russian newspaper.

Mr Le Pen’s original quoted remarks run directly counter to the official line of his daughter and his party. They have suggested that the attacks on Charlie Hebdo and a Jewish supermarket are the final proof that France faces an  “enemy within”, which has been created by immigration and open EU borders.

Conspiracy theories of the kind espoused by the elder Le Pen sprang up on the internet within hours of the Charlie Hebdo attacks. They have been repeated in recent days by some – not all - young Muslims in France,  torn between identifying with the Kouachi brothers and insisting that they were stooges of the French authorities, Washington and Israel.

The  French “pope of conspiracy theories”, Thierry Meyssan, now based in Damascus, insisted that the Charlie Hebdo massacres were “ordered by US neo-cons and liberal hawks”. An American conspiracy site, McLatchy, has claimed that the Kouachi brothers were working for French intelligence.