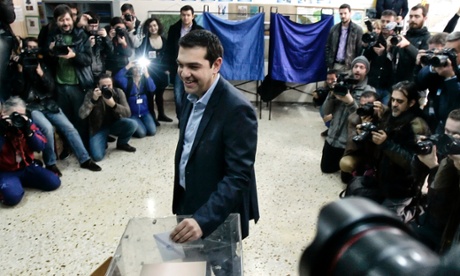 Syriza, the radical leftists who have pledged to roll back austerity and renegotiate Greece’s mammoth debt, swept to a stunning victory in the country’s elections on Sunday – but looked like falling agonisingly short of an outright majority.

With more than 90% of the results in, official interior ministry results put Alexis Tsipras’s party on 36%, eight points clear of their chief rivals, the conservative New Democracy of outgoing prime minister Antonis Samaras, on 28%.

But even with the 50-seat bonus awarded to the winning party, that translated to 149 seats – two less than Syriza needs to govern alone in the 300-seat parliament. The extreme-right, anti-immigrant, Nazi-inspired Golden Dawn, several of whose 18 MPs are in jail awaiting trial for membership of a criminal organisation, clinched third place ahead of the new, centrist To Potami party.

In front of an ecstatic crowd of cheering, flag-waving supporters outside Athens university, Tsipras said that “today, the Greek people have made history. Hope has made history.”

The Greek people, he said, had “given a clear, strong, indisputable mandate. Greece has turned a page. Greece is leaving behind destructive austerity, fear and authoritarianism. It is leaving behind five years of humiliation and pain.”

Tsipras, 40, will lead the first eurozone government to openly oppose bailout conditions imposed by the European Union and International Monetary Fund, seemingly setting Athens on a collision course with Brussels and particularly Berlin. The result had “made the Troika [the EU, IMF and European Central Bank] history,” he said.

Criticism was not slow in coming. The president of Germany’s Bundesbank, Jens Weidmann, said Greece should stick to its budget commitments. “I hope the new government won’t call into question what is expected and what has already been achieved,” he told ARD television.

After five brutal years of austerity and recession, Greece’s 9.8m voters went to the polls under clear skies. Looking confident and relaxed, Tsipras cast his ballot in a primary school in the Kipseli district of Athens, saying the day represented the Greek people’s “last step towards regaining our dignity”.

“There has to be change, big change. The economy has collapsed. Poverty has reached proportions … People, ordinary people like you and me, are poking around in dustbins to get food to eat. The young can only find work abroad. Syriza is Greece’s hope.”
Phoebe Greenwood talks to Greeks before a high-stakes election in the country.

Maria, 78, a lifelong conservative, said she had voted Syriza for the first time because she had “no confidence left in anyone, any party, who has governed us up until now”.
She added: “Things are in a very bad way here. But at least Syriza seem to care. My grandson – he’s seven – said to his mother, just now: ‘Vote Tsipras, mummy. He talks about the poor people.’”

Samaras appeared on national television to concede defeat, saying he had “assumed charge of a country that was on the brink of collapse … and restored its international credibility.” But he said the Greek people had spoken and the country must respect their decision.

Tsipras’s fierce anti-austerity, anti-bailout message has found an enthusiastic audience across a now visibly strung-out and worn-down country. Since 2009, Greece’s GDP has plummeted by a quarter and its household income by more than a third, while joblessness has trebled, to 26%.

Swingeing spending cuts and soaring unemployment have seen about 3.1 million people, or a third of the population, lose their social security and health insurance, leaving the country on the brink of humanitarian crisis. Almost third of Greece’s population now lives below the poverty line, while 18% are unable to afford basic food needs. 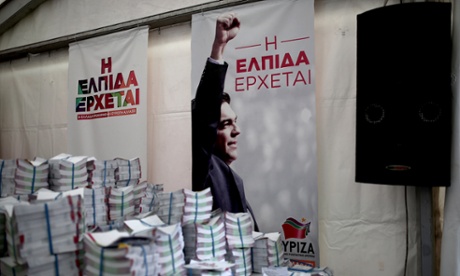 If Syriza does need a coalition partner, its choices are limited. Golden Dawn is clearly not an option and the Communist party has refused all cooperation with Syriza. Possible allies could include To Potami, whose leader said he was willing to talk, or the populist Independent Greeks, who agree with Syriza that austerity has to end, but disagree on almost everything else. Neither alliance would be easy.

The prospect of a Syriza victory spooked creditors who worry that Athens will seek a write-off of at least part of its €320bn debt. Some analysts fear that a tough Syriza approach to negotiations could push Greece out of the eurozone, although Germany’s chancellor, Angela Merkel, insisted on Friday that this was not what she wanted.

Tsipras’s line has softened markedly in recent weeks, but several EU capitals are still alarmed by promises to cancel the most draconian budget cuts imposed as part of the country’s €240bn bailout package.

“We will start with the things we can easily do, that we can afford, but will make a difference,” said Gabriel Sakellaridis, a young Syriza candidate in central Athens.

“We don’t have a magic wand; people know that. But we can take simple steps to restore some social justice: raise the minimum wage and pension, abolish the most unfair new taxes.”

Above all, he said, Syriza could “restore the hope that has been missing from the Greek people through the past five years of fear, anxiety, despair. Syriza has convinced them we not just that we want to change things, but that we can.” 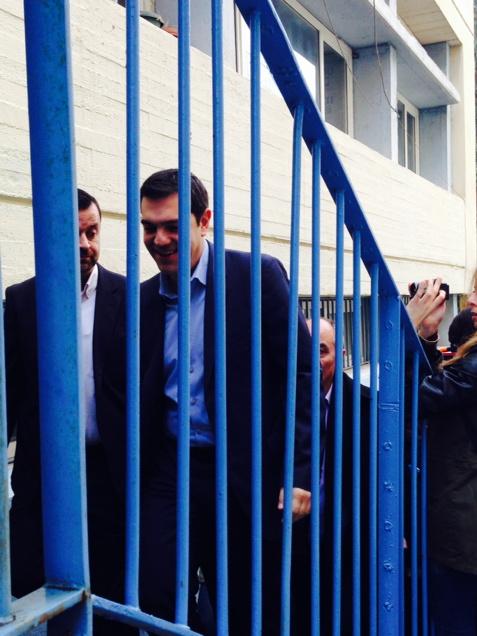