His first speech as President of the United States -- Full Transcript 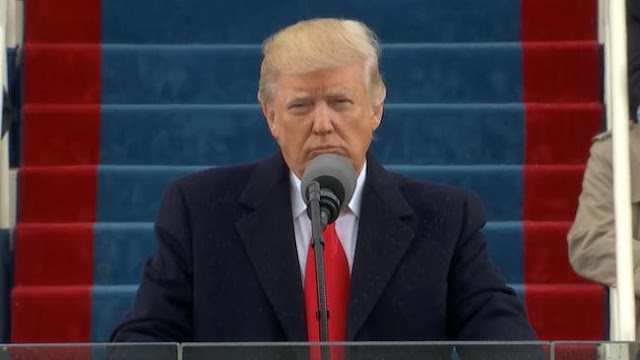 His first speech as President of the United States

Watch President Trump's Inaugural Address
Donald Trump delivered his first speech as President of the United States on Friday morning.
Donald Trump delivered his first speech as President of the United States on Friday morning.
Trump was joined at the inauguration by members of his family, including his wife Melania Trump, and his children Donald Trump Jr., Eric Trump, Ivanka Trump, Tiffany Trump and Barron Trump. Outgoing President Barack Obama, along with former Presidents George W. Bush, Bill Clinton and Jimmy Carter were also in attendance.
Ahead of his speech, Trump aide Kellyanne Conway said the American people could expect Trump’s address to be a message to “unify the country.” “You’re going to hear a man of action, a man of resolve in what we all know to be a divided country,” Conway said Friday morning on CBS.
Read the full transcript of his remarks below:
[*] TRUMP: Chief Justice Roberts, President Carter, President Clinton, President Bush, President Obama, fellow Americans and people of the world, thank you.
(APPLAUSE) We, the citizens of America, are now joined in a great national effort to rebuild our country and restore its promise for all of our people.
(APPLAUSE)
Together, we will determine the course of America and the world for many, many years to come. We will face challenges, we will confront hardships, but we will get the job done.
Every four years, we gather on these steps to carry out the orderly and peaceful transfer of power, and we are grateful to President Obama and First Lady Michelle Obama for their gracious aid throughout this transition. They have been magnificent. Thank you.
(APPLAUSE)
Today’s ceremony, however, has very special meaning because today, we are not merely transferring power from one administration to another or from one party to another, but we are transferring power from Washington, D.C. and giving it back to you, the people.
(APPLAUSE)
For too long, a small group in our nation’s capital has reaped the rewards of government while the people have borne the cost. Washington flourished, but the people did not share in its wealth. Politicians prospered, but the jobs left and the factories closed. The establishment protected itself, but not the citizens of our country. Their victories have not been your victories. Their triumphs have not been your triumphs. And while they celebrated in our nation’s capital, there was little to celebrate for struggling families all across our land.
(APPLAUSE)
That all changes starting right here and right now because this moment is your moment, it belongs to you.
(APPLAUSE)
TRUMP: It belongs to everyone gathered here today and everyone watching all across America. This is your day. This is your celebration. And this, the United States of America, is your country.
(APPLAUSE)
What truly matters is not which party controls our government, but whether our government is controlled by the people.
(APPLAUSE)
January 20th, 2017 will be remembered as the day the people became the rulers of this nation again.

Email ThisBlogThis!Share to TwitterShare to FacebookShare to Pinterest
Libellés : TRUMP