Dollar heads for best run of gains in 17 years

Dollar heads for best run of gains in 17 years 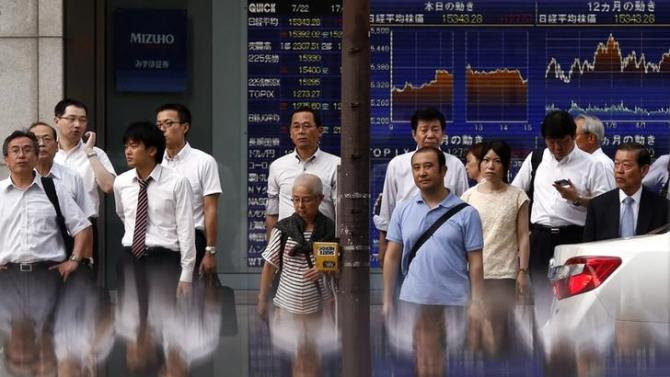 w photo
Pedestrians standing in front of an electronic board showing the graph of recent fluctuations in Japan's Nikkei average outside a brokerage are reflected in a polished stone surface, in Tokyo July 22, 2014. REUTERS/Yuya Shino/Files
By Patrick Graham
United States and its major economic peers are diverging after six years of financial turmoil.
A broad rise for the greenback was the main bet of most major investment houses this year but it has taken a very long run of relatively good U.S. numbers and a surge in concern over European and Japanese growth for the currency to deliver.
Investors are convinced a Federal Reserve meeting next Wednesday will rubber-stamp a shift towards higher interest rates in 2015, as suggested by research from the U.S. central bank this week.


That drove benchmark 10-year U.S. Treasury yields to their highest in over a month on Friday , while European stocks shrugged off weakness in Asia to inch higher. (.FTEU3)
A 2 percent rise on the week took the U.S. currency to a six-year high of 107.39 yen (JPY=). Against the euro it gained 0.2 percent on the week and was broadly flat on the day at 1.2921 (EUR=).
"We do seem to have reached a tipping point both on expectations for interest rate rises next year and the dollar," said Simon Derrick, head of currency research at Bank of New York Mellon in London.
"The rally finally seems to be getting the attention it deserved."
The dollar index, a measure of the greenback's value against a basket of six major currencies, remained on course for its longest streak of weekly gains since the first quarter of 1997.
A range of political shocks to the system, from turmoil in the Middle East to fighting in Ukraine and a referendum on Scottish independence, have added to support for the greenback against emerging and developed world currencies.
But the euro, hammered by worsening economic numbers and a further easing of monetary policy by the European Central Bank in the past month, has begun to find some support in the last few days.
Sterling wobbled ahead of the latest poll to show next week's vote on whether Scotland will break its 300-year old political union with England as too close to call.
In general, nerves on currency and equity markets have eased a little on the back of surveys showing the "No" camp edging back in front.
Britain's top equity index rose for the first time in six sessions (.FTSE), driven by Scottish-based shares such as Royal Bank of Scotland (RBS.L), soft-drink group AG Barr (BAG.L) and utility SSE (SSE.L).
"There's a lot of hesitation at this point," Saxo Bank sales trader Andrea Tueni said.
"People are reluctant to take any new positions ahead of the Scotland referendum, but also ahead of the Fed's meeting next week, which could turn out to be a real game-changer."
CARRIED BACK
The rise in volatility on currency markets -- at a four-year high on sterling on Friday -- has prompted some investors to pare back on carry trades, where they borrow at low rates in euros and yen to buy higher-yielding assets such as commodity-linked or emerging market currencies.
Victims included the Canadian dollar, which plumbed a five-month low of C$1.1030 (CAD=D4), while Australia's dollar hit a six-month low of $0.9053 (AUD=D4).
The dollar gains have also pushed oil prices to their lowest in two years (LCOc1), while gold sank to an eight-month trough and copper fell to a three-month low.
In contrast, the dollar's gains on the yen were considered positive for Japanese exports, corporate earnings and equities. The broad Topix index (.TOPX) added 0.2 percent and reached its highest level since July 2008.
Stocks elsewhere in Asia fared less well as investors fretted that even the hint of a shift in Fed policy might spark a withdrawal of funds from emerging markets. MSCI's broadest index of Asia-Pacific shares outside Japan was down 0.3 percent at one-month lows.
A strong result from U.S. retail sales at 1230 GMT would only add to speculation the Fed might refine, or even drop, its commitment to keeping rates low for a "considerable time" after its asset purchase programme ends. That has put yields on two-year Treasuries (US2YT=RR) on track for their highest weekly close since April, 2011.
"The market will be on the defensive going into next Wednesday's Fed meeting due to the growing contingent who are convinced a hawkish language change is imminent," said William O'Donnell, head of Treasury strategy at RBS.
"But bearish expectations may surpass what the Fed will deliver," he added. "We think September is a bit premature for a language change and that the Fed is just looking to have the conversation."
(Editing by Catherine Evans
Related Stories
à 18:54